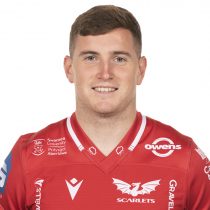 Blacker joined the Pontypridd squad as one of the Blues Academy allocation for the 2016 - 2017 season.