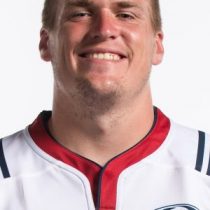 Jensen was on his high school's football and track team - winning districts in javelin throw.

He turned to rugby and became a USA Rugby First-Team All American.

Jensen represented the Men's Collegiate All Americans on their Summer tour to Queensland in July 2016 and was part of the USA Selects in the October 2016 Americas Pacific Challenge.

He was named a reserve for the Men's Eagles in their friendly against the Maori All Blacks in November 2016 and was named in the USA team ahead of the 2017 Americas Rugby Championship.

In May 2017, Jensen was named in the USA Men's Eagles squad for the Summer Series and Rugby World Cup 2019 Qualifiers in June and July.

Late 2017 saw him sign a deal with Major League Rugby side Utah Warriors.