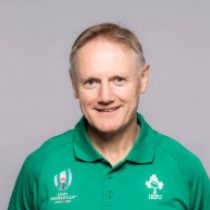 Born in New Zealand, Joe Schmidt trained as a school teacher before heading to Ireland in play rugby in the lower leagues during the 1990's. He returned to New Zealand to take up a teaching position as well as coaching New Zealand schools.

Schmidt left teaching to pursue coaching in 2003 and began his full-time career with Bay of Plenty where he guided the side to a Ranfurly Shield victory against Auckland. He joined the Blues as assistant coach from 2004–2007 before crossing the seas once again to join French side Clermont Auvergne.

Clermont finally went on to win the Top 14 competition in 2010, after 11 appearances in the final. During the 2009–10 Heineken Cup, the side advanced to the Quarter-finals where they lost to Leinster 29–28 - the same club that was to become Schmidts new home for the 2010–11 season.

2013 saw Schmidt embark on his role as Ireland's national coach on a 3-year contract. He opened his season with a win against Samoa on 9 November 2013 and went on to coach Ireland to a 2014 and 2015 Six Nations Championship title.

Schmidt then signed a new contract that saw him commit to Ireland up to the end of the Rugby World Cup 2019 in Japan.

In November 2018, Schimdt confirmed that he will leave his head coach role with Ireland Rugby to prioritise family commitments after the Rugby World Cup in 2019.