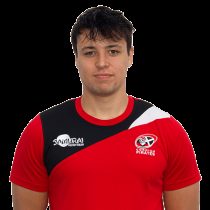 Rory joined the Connacht academy ahead of the 2013/14 season.

After impressing in his first year, he was handed a debut for the senior side in the 2013–14 European Challenge Cup, coming on as a replacement against Bayonne on 10 October 2013.

In the 2015/16 season, Parata made his competitive debut for Connacht in the first game of the Pro12 season against Dragons.

He signed a full contract with the province in December 2015, which would see him become a member of the senior set-up for the 2016/17 campaign.

At the end of the 2016/17 season, Parata left Connacht after his contract expired.

In January 2018, he joined Zebre Rugby before signing a one-year contract with Cornish Pirates.

In two seasons with the Cornish Pirates, Rory proved an all but ever-present and consistent performer for the club.

After 46 appearances for the side, he put pen to paper on a one-year contract in May 2020.