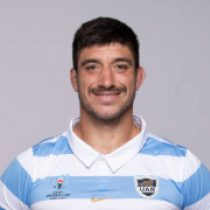 Born in Buenos Aires, Lavanini represented Argentina U20 in the IRB Junior World Championship after starting his career with Pampas XV.

He made his senior debut against Uruguay in 2013 & was called into The Rugby Championship squad as injury cover.

Tipping the scales at 130kg, Lavanini joined up with Jaguares for the 2016 Super Rugby season & became a leading presence in the side.

Whether on the gain-line, at the breakdown or in the lineout, he disrupts to fine effect.

Lavanini was named in Los Pumas squad for the 2017 November series having won 35 caps.