The Springboks went through a major transformation under Rassie Erasmus in 2018 with the former Springbok introducing a new a number of new faces and changing the fortunes of the struggling powerhouse test nations.

Fast forward two years and the Springboks are the current World Team of the Year, have the World Player of the Year in their ranks and are currently the World Champions.

The depth of the Springboks helped them to World Cup glory in 2019 with the Springboks embracing the philosophy of using their entire 23 to great use.

With the likes of Francois Louw and Tendai Mtawarira retiring and Jacques Nienebaar taking over from Rassie Erasmus as the new head coach of the side, there is plenty of change ahead for South Africa in 2020. We take a look at how the Springboks' pack will change in the new decade and how well-stocked they are in every position.

Normally when a test centurian or long term first choice player brings an end to their test career, there is a period of time where a team struggles to fill the void that player has left. However, this won't be the case for South Africa in replacing Tendai 'The Beast' Mtawarira with Nienabaar already having an experienced and world-class loosehead in Steven Kitshoff.

While Kitshoff will grab the starting jersey, there is plenty of competition to be his deputy. Thomas du Toit has shifted around between the tighthead and loosehead role for the Sharks and Springboks and will look to make a play for both jerseys under the new boss. The Bulls' Lizo Gqboka has shown promising signs of his potential and made his debut before the Rugby World Cup and will inevitably get a fair run for the jersey this term.

Coenie Oosthuizen and Trevor Nyakane are in the same boat as Thomas du Toit in being able to play both positions while Nyakane is more likely to feature on the tighthead side having started in the position before his injury. The Sharks' Ox Nche has also showed signs of promise having earned his first test cap back in 2018 and continually built on his game since while the Lions' Dylan Smith has impressed but hasn't got recognition at test level as of yet.

Jacques Nienabaar will kick off his tenure with two world-class hookers in Malcolm Marx and Bongi Mbonambi with both hookers capable of making it to the next Rugby World Cup with the turning 33 before the World Cup in France.

The experienced Scarra Ntubeni has always been close to the test team and finally earned his first test cap in the build-up to the Rugby World Cup. He will still be in the mix with Mbonambi currently sidelined. The Cheetahs' Joseph Dweba has been one of the most consistent hookers domestically for some time and is expected to sign with Bordeaux for next season. His form with the Cheetahs won't go unnoticed and could come into the conversation for a test call up. Finally, at the Sharks Kerron van Vuuren has shined for the Sharks and was tipped for higher honours by former forwards coach Matt Proudfoot in 2019.

Outside of South Africa, Akker van der Merwe and Franco Marais have shined in the Premiership with the latter having represented South Africa before heading abroad and the former already capped, both might come back into the test frame this year. 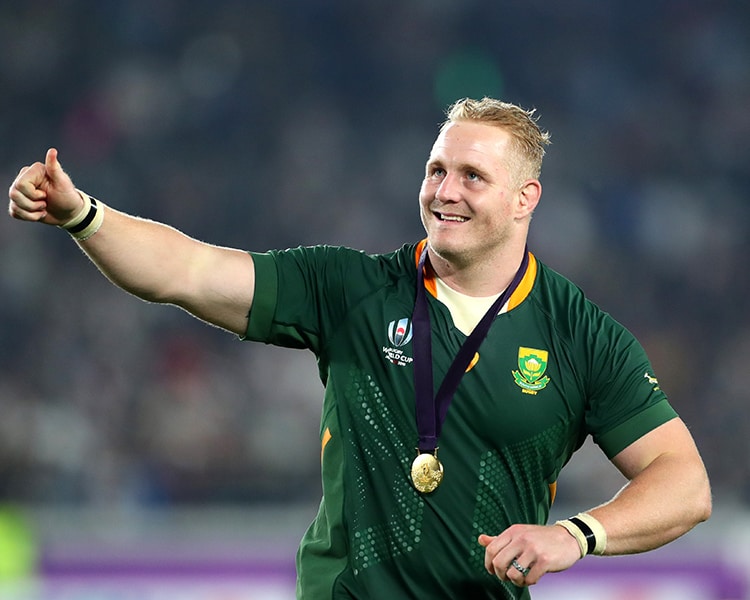 There's a famous old quote from Sringbok legend Danie Craven, who said the first player on any teamsheet should be your tighthead prop. And any coach's second selection should be his back-up tighthead before he starts thinking about the rest of his team.

Dr. Craven would have the loved the current stock of tightheads in the current Springbok pack. As mentioned before, Trevor Nyakane was the go-to tighthead prop for the Springboks before an injury cut his World Cup hopes. Frans Malherbe has been in the mix since his debut in the Green jersey but will have plenty of competition in Saracens' Vincent Koch, the Sharks' Thomas du Toit and the Stormers and soon to be Harlequin Wilco Louw.

All the above-mentioned candidates have all been capped already by the Springboks as too have Coenie Oosthuizen with Carlu Sadie being one of the promising youngsters starting to catch the eye of selectors - particularly last season. All in all the Springboks are quite well-stocked in the tighthead role considering that even Toulon tighthead prop Marcel van Merwe wasn't mentioned.

Arguably the Springboks most well-stocked position not only in their pack but their entire team.

The Springboks went to the World Cup with four second rowers, all which would arguably start for any test nation at the Rugby World Cup. Lood de Jager and Franco Mostert have incredible engines on them and are incredible lineout operators with the Springboks losing just two lineouts the entire World Cup.

They were pair with two bruisers whose engines are just as impressive in the lineout in Eben Etzebeth and RG Snyman. While all four of those locks are superb athletes the Boks still had the option of picking Pieter-Steph du Toit in the second row, a position he started his professional career in.

Outside of the Republic, there are numerous players who could do a job for Springboks in the likes of Jannes Kirsten, Ruan Botha, Gerbrandt Grobler, Nico Janse van Rensburgh, Jacques du Plessis and Etienne Oosthuizen to name a few.

The World Player of the Year will undoubtedly keep his position once he returns from his frightening injury during the Stormers Super Rugby season.

du Toit does have some players lining up to have a shot at his jersey. In the Premiership, Jacques Vermeulen and the du Preez brothers have been in excellent form this Premiership season as too has Ruan Ackermann.

Rynhardt Elstadt earned his first test cap in 2019 and was close to making the World Cup squad and will likely be right back into the squad. Although the likes of Arno Botha and Marcell Coetzee have featured at no.8 for Munster and Ulster respectively, neither would be out of place on the side of the scrum.

In South Africa Jaco Coetzee, Johan du Toit (Pieter-Steph's brother), Tyler Paul and Cobus Wiese could all well be in for shout. 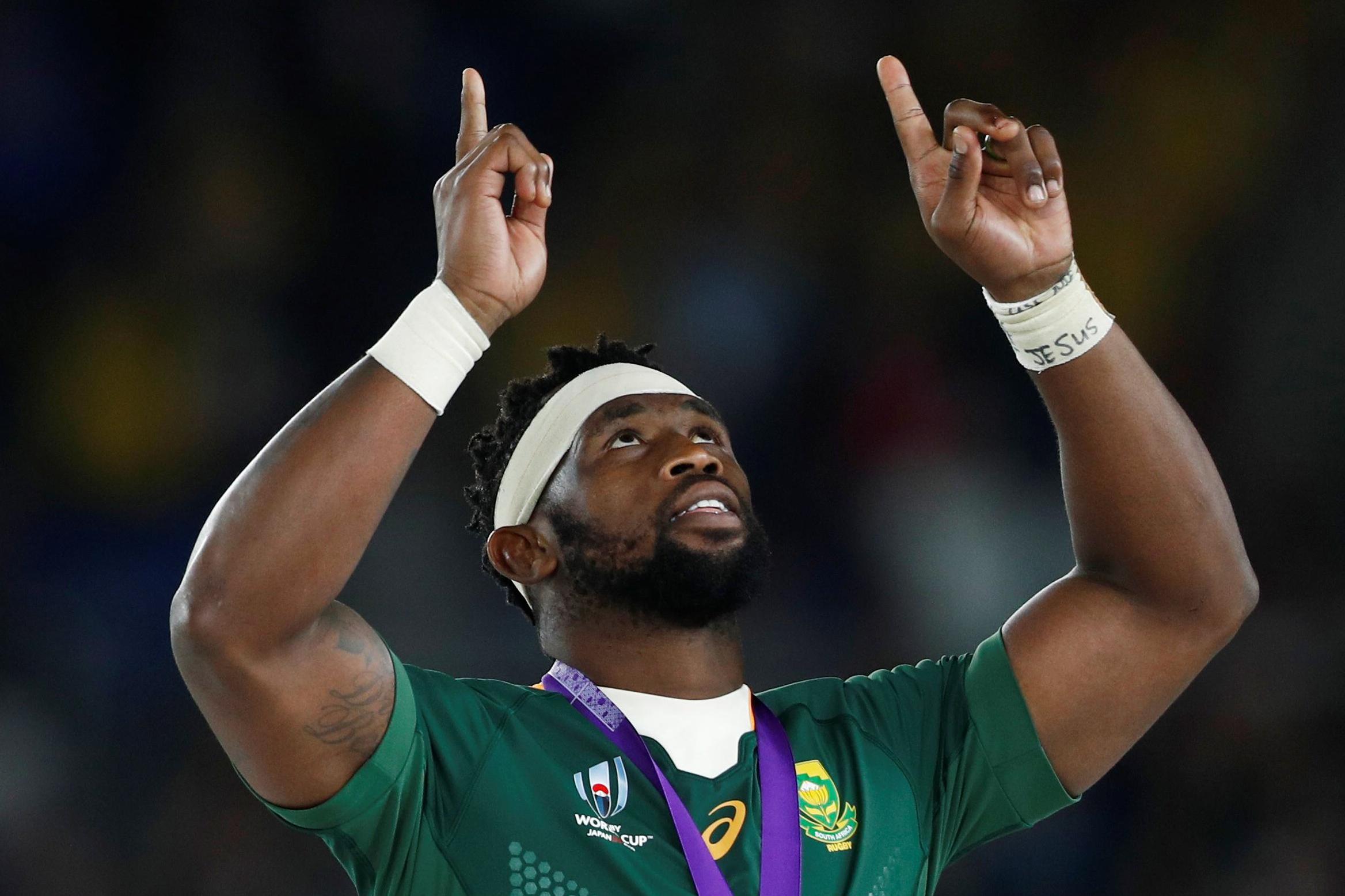 Kolisi has chopped between openside and blindside for the South Africans but has seemingly found his role on the openside in recent times.

The inspirational captain will likely continue in his role for the Springboks but the side has suffered a blow through the retirement of Francois Louw and Kolisi's injury.

There are options for Nienabaar after Kolisi with the Sharks' James Venter stepping up this season with the Stormers' Jaco Coetzee also performing well.

Marnus Schoeman has been a standout for the Lions with Kwagga Smith featuring in World Cup squad in Japan and will still be in the spotlight. Again, The du Preez brothers and Jacques Vermeulen have enjoyed fine seasons in the Premiership.

Man of the match in the final, at 33 Duane Vermeulen continually performs in the green and gold jersey.

He is still the front runner for the #8 jersey with plenty of suitors lining up to replace him. The speedy and skilful Sikhumbuzo Notshe has been sublime for the Sharks since making the switch from the Stormers. A contrasting approach is supplied in the hard-hitting and ball carrying frame of Juarno Augustus.

Abroad, Arno Botha and Marcell Coetzee are in some of the best form of their careers while Dan du Preez has been sensational for Sale Sharks.

All in all, there are numerous excellent players waiting to have their shot at the Springbok jersey with some youngsters not even mentioned in the piece. The Springbok pack played a large part in their victory in Japan and by the looks of it, it will only improve in the coming seasons and years to come with the side developing even more depth and varieties of style.