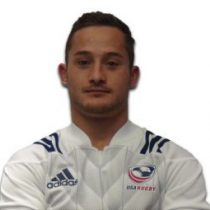 Eloff, younger brother of Eagle, Phillip, made his full international test debut with the Eagles during the inaugural Americas Rugby Championship competition in early 2016.

Shortly thereafter, he signed a professional contract with the Ohio Aviators in PRO Rugby. Though he missed most of the season due to an injury, he was named to the USA Rugby Selects for the developmental Americas Pacific Challenge competition in the fall of 2016.

In January 2017, he was named in the USA squad for the 2017 Americas Rugby Championship.

In May 2017, Eloff was named in the USA Men's Eagles squad for the Emirates Airline Summer Series and Rugby World Cup 2019 Qualifiers this June and July, after winning 7 caps so far.