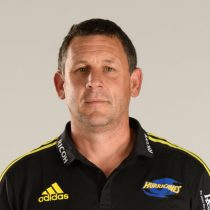 Holland had a long and illustrious playing career before entering coaching. A skilful midfielder, Holland played 69 matches for Manawatu between 1991 and 1996 before moving to Taranaki wherehe racked up another 25
representative caps.

But it was in Ireland where Holland made his most lasting impression as a player. He represented Munster more than 100 times, mostly at centre, before transitioning into coaching.

He spent five years as Munster’s back, attack and skill coach before returning home to New Zealand where he was hired as Canterbury’s assistant coach from 2012 to 2015.

In 2015, he joined the Hurricanes coaching staff and has helped guide the team to two finals including the club’s inaugural Super Rugby title in 2016.

Holland took over as the Hurricanes head coach after John Plumtree was promoted to the All Blacks after the Rugby World Cup in Japan.