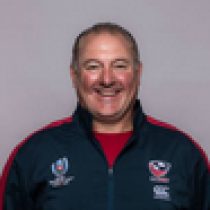 Gold joined London Irish in July 2001 as forwards coach under Brendan Venter.[2] At the end of the 2002–2003 season, Venter decided to return to South Africa and Gold took over the head coach position, which he held until June 2005.

At the end of the 2004–2005 season, Gold was offered a chance to return to his native Cape Town; London Irish agreed to release him from his contract, and he returned to South Africa to take up the role of forwards coach at Western Province.

After two seasons as forwards coach, Gold took on the role of head coach at Western Province in July 2007 after Kobus Van Der Merwe and Jerome Paarwater resigned from their positions as head coach and assistant head coach.

In May 2008, Gold was appointed by Peter de Villiers as an assistant coach of the Springboks. He would hold this position during the British and Irish Lions 2009 tour of South Africa and the 2011 Rugby World Cup.

In January 2012, with Newcastle Falcons nine points adrift in the relegation zone of the Aviva Premiership, they announced that Gold and Mike Ford would join the club. Gold was made head coach and Ford defence coach. By the end of the season Newcastle had all but closed the points gap on London Wasps and ended up being relegated by one point.

In May 2012, Bath Rugby appointed Gold as head coach of a coaching team. However, after a lacklustre season, Gold was elevated to Director of Rugby, with Ford becoming head coach. On 9 December 2013, Gold departed the club.

In 2014, Gold was named head coach of the Natal Sharks.

In January 2017, he was appointed as the Director of Rugby at English Premiership side Worcester Warriors.

In October 2017, Gold accepted an offer to become the Head Coach of the USA. He will remain at Sixways to fulfil contractual obligations before his new role begins.