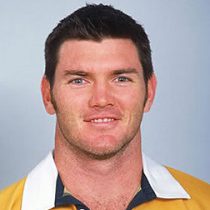 Daniel Herbert, the younger brother of Anthony Herbert, was born on 6 February 1974 in Brisbane, Queensland.

He made his test debut at the age of 20 against Ireland on 11 June 1994. He battled Jason Little for a spot alongside Tim Horan before displacing him in 1998. Herbert went on to establish himself as the world's premier outside centre and was a key member of the Australian side that won the 1999 Rugby World Cup.

Herbert was named in the 'Team of the World Cup 1999' alongside his centre partner, Tim Horan.

In 2001 he was promoted to the role of Queensland Captain and Australian Vice-captain and in that same year scored a brace of tries in the decisive third test against the British Lions test, helping the Wallabies to first ever series victory over the tourist.

Known for his aggressive defence and line-breaking ability, Herbert revolutionised the role of a modern-day outside centre.
He was a vital part of the 'Golden Era' of Australian Rugby, which celebrated a World Cup victory, a British Lions series victory, a Tri-Nations Trophy and five consecutive Bledisloe Cups.

Herbert amassed 124 caps for the Reds before moving to France and joining Perpignan for the season 2003–04.

He only played 7 matches with Perpignan and suffered a very serious neck injury, which resulted in surgery in April 2004 and subsequently in Herbert's retirement from the game.

He won 67 caps for the Wallabies scoring 11 tries, including 2 against the British and Irish Lions in 2001.