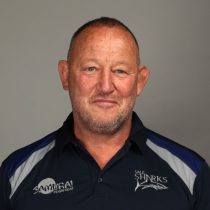 The name Steve Diamond has been synonymous with Sale Sharks for well over 40 years with the man cutting his career as a hard-nosed front-rower for the club since 1989.

A one-club man, Diamond played over 350 top-class games for Sale and received a call up to the senior England squad as cover for the 1997 England rugby union tour of Argentina and Australia, however, he was ultimately not capped at that level.

An abrasive hooker as a player, his eleven years as a player at Sale stood him in good stead as he made a return in 2001, alongside Jim Mallinder, to coach the team. After stints with England Saxons, Saracens and the Russian National Team, ‘Dimes’ returned to Sale, taking over from the departing Mike Brewer.

Director of Rugby Steve Diamond has been involved with Sale Sharks for most of his professional career in various different guises and knows the club inside out.

Often combining a number of roles, including CEO at one time, Diamond has overseen a huge changearound at the club. His no-nonsense approach has won him a loyal fan base at Sale Sharks and he will hope that after a few years of uncertainty and transition, he has assembled a coaching and playing staff capable of returning the club to its former glory.

In December 2020, he announced that he would leave Sale Sharks for personal reasons.