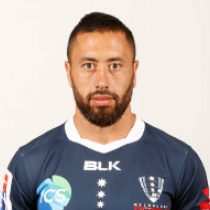 The electric half back had a standout year in 2016, taking out the PG Hampshire award in the Pindan Premier Grade, winning tournament MVP at the World Club 10s in Mauritius and played a third consecutive year in the Buildcorp National Rugby Championship for the Perth Spirit.

After a strong start to his Super Rugby career playing nine games for the Western Australian club, Ruru re-signed for two more years.

Ruru made a strong start to his Super Rugby career playing 11 of the Western Force's 15 Super Rugby matches.

He continued his fine form in the 2017 NRC before the Melbourne Rebels signed the former scaffolder on a two-year deal.