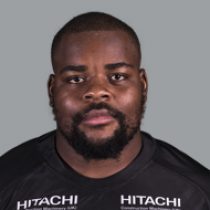 Newcastle Falcons announced the signing of Sami Mavinga in March 2017.

Mavinga is known to the Falcons after playing twice against them during this season’s European Challenge Cup.

The 115kg forward has featured nine times in the competition for Lyon, for whom he has made five top-flight league starts this season after coming through the club’s academy system.

In 2017 he signed a deal with Newcastle Falcons where he made 26 appearances before trading the club for Stade Francais.