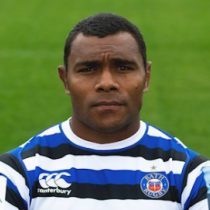 Fijian born Rokoduguni is a powerful centre or wing who only began his professional career in 2012 when he signed a full time contract with Bath Rugby.

Rokoduguni scored a brace on his debut for Bath against Dragons in November 2012.

He was one of the breakthrough stars of the 2013/14 season scoring several crowd-pleasing tries in his first full season of professional rugby.

Rokoduguni's rise in English rugby was consolidated by a Saxons call-up to face Scotland A at the start of 2014, before gaining his full England cap against the All Blacks at Twickenham later that year.

The winger continued his prolific try-scoring throughout his time in the West Country, with 48 tries in his 126 appearances by October 2018 before signing a new long-term deal with Bath Rugby.