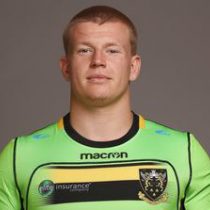 Sidcup-born Peters was introduced to rugby at eight years old in Spain, playing for Marbella RFC before joining Oundle School.

The combative second row has been a member of the Saints Academy for a number of years playing for their Under-17 and Under-18 teams.

The towering 2.01 metre lock, who was coached by former Saints hooker Jon Olver at Oundle, has picked up caps in the England Under-18, after representing Spain Under-17s and Under-18s.