How Things Stand After Round 6 of Super Rugby Aotearoa

With the Crusaders enjoying a bye in Round 6 of Aotearoa, the Hurricanes battled it out against the Blues while the Chiefs hosted a spirited Highlanders outfit.

The ‘Canes settled the score from Round 1, pulling off a good 29-27 win against the Blues who, by their captain’s own admission, were not themselves.

Meanwhile, in Hamilton, the Highlanders exhibited a superb display of attacking skill and mental toughness to pull the game from the fire in the second half and run out deserved 33-31 victors. 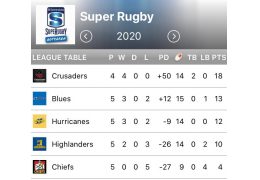 The results mean that the Crusaders now enjoy a five point cushion as they perch atop the log with 18 points and a game in hand. The Blues lie in second position, only one point ahead of the Hurricanes.

It was the Highlanders’ second win of the tournament against a Chiefs outfit who are struggling badly, having yet to post a victory, and are well and truly out of the running.

The Crusaders have the opportunity to make it two from two as they face the Hurricanes in Round 7. The last time the teams met (in Round 2) the ‘Saders came away with a good 14-point victory. However, the Hurricanes will no doubt be buoyed by their well-orchestrated win over the Blues and there can be no guarantee that they won’t spring a surprise on their Christchurch foes.

The Blues will fancy their chances to get back on track after two losses on the trot when they return home to face the Chiefs in Auckland. One would fancy the Blues chances in this fixture, although it can surely only be a matter of time before the Chiefs begin to click.