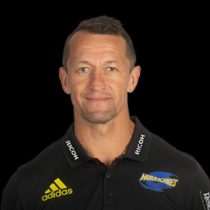 Dubbed as King Carlos, Carlos Spencer first rose to prominence when he starred alongside Christian Cullen in a Ranfurly Shield challenge in 1991, playing for the Horowhenua team against Auckland.

Auckland coach Graham Henry spotted Spencer's talent and recruited him to play for the Auckland team. He played for the Blues Super 12 team from the inception of the competition in 1996 until 2005, and for the Auckland NPC side.

He played for the All Blacks as he debuted in a non-test tour match on 4 November 1995, but did not play his first test match until 1997. His test debut was against Argentina at Athletic Park in Wellington on 28 June that year. He scored 33 points in that match alone.

His All Black appearances as a starter were somewhat irregular thereafter, as Andrew Mehrtens was generally preferred as the first-choice flyhalf for the side during the period from 1995–2002. He was selected for the 1999 All Blacks World Cup squad but became injured in training at London, so did not play a match in that tournament. However, following an exceptional season for the Blues in Super 12, Spencer became first-choice first five-eighth for the All Blacks in 2003, and was a part of the squad for the Rugby World Cup that year.

Spencer was praised for his creative style of play throughout his career and retired with 35 Test caps and scored 291.

In 2005 he signed for English club, Northampton Saints, where he stayed until January 2009 before he signed for Gloucester on a 17-month contract.

In January 2010 Spencer signed with the Johannesburg-based Golden Lions as a player coach for the side during 2010 and 2011 Super Rugby seasons. The contract offered to him was said at the time to be the highest ever in South Africa. He moved to the Durban-based Sharks for the 2013 season.

In December 2011, Spencer stepped into the boxing ring against Rugby League's Awen Guttenbeil in Fight for Life 2011 in Auckland, New Zealand. The fight was controversially ruled a draw despite Spencer knocking down Guttenbeil with seconds remaining on the last round.

In December 2013, he signed a five-year contract to become the kicking and specialist skills coach at Port Elizabeth-based side, the Eastern Province Kings.He was appointed as their head coach on 20 February 2014. He was in charge of just one Currie Cup season in 2014, where they achieved just one victory in ten matches.

The Hurricanes announced that Spencer would join the side's coaching staff for the 2019 Super Rugby season.